Earlier this month in Paris, representatives from nearly 200 nations reached a landmark agreement that will commit their countries to lower greenhouse gas emissions in an effort to limit the rise in global average temperature to 2 degrees Celsius — thus avoiding the most devastating consequences of climate change.

The temperature already has risen by almost 1 degree above pre-industrial levels and the effects are being felt around the world, particularly in developing nations.

As countries submitted detailed climate action plans known as Intended Nationally Determined Contributions (INDCs), hundreds of companies were setting their own targets, some “wielding the might of nations themselves,” GreenBiz Managing Editor Elsa Wenzel recently wrote. Her comprehensive list of climate pledges provides a picture of the breadth of voluntary commitments among a wide range of actors.

With countries, industries and companies each making promises, what is the context for interpreting climate commitments and how do they all connect? Here’s what you need to know about climate action in a post-Paris Accord world.

Climate leadership from countries to industries

President Barack Obama called the Paris climate accord “a tribute to American leadership” in his address to the nation.

But he also put the event into context, stating:

Even if all the initial targets set in Paris are met, we’ll only be part of the way there when it comes to reducing carbon from the atmosphere, so we cannot be complacent because of today’s agreement. The problem is not solved because of this accord. But make no mistake, the Paris Agreement establishes the enduring framework the world needs to solve the climate crisis. It creates the mechanism, the architecture, for us to continually tackle this problem in an effective way.

By 2030, global emissions are projected to be at 56 gigatons, compared to the 42 gigatons recommended as the least costly pathway to reach the 2-degree Celsius goal.

Should all the commitments for the Paris deal be implemented, the gap would shrink from 14 to 12 gigatons, according to UNEP. Nevertheless, that still leaves a gap for society to close in order to stave off the consequences of climate change.

Every climate action matters, but some actors carry more weight than others. The Paris Agreement establishes country-level targets, but not all countries are equal.

The top 10 emitters, for example, are responsible for 70 percent of all greenhouse gas emissions. China (24 percent) and the USA (12 percent) emit more CO2 than the bottom emitting 174 countries combined.

And consider this: Governments can pass laws to regulate activities such as energy production, but most of the reducing won’t be done by the governments themselves.

Most emissions come from electricity production and industry, so whether a country meets its target largely depends upon what the private sector does next.

Comparing emissions from industry and global sources of emissions, some sectors have a much smaller footprint than others. Telecommunications, for example, has a footprint of 2 percent of global carbon dioxide emissions.

To stay below 2 degrees, however, there can be no bystanders. And they know it.

In theory, the Paris accord should unlock capital to drive transformative innovation in private industry, which will yield results that countries can point to as a mark of progress.

In reality, a blend of best practices and better policy likely will inform industry’s response.

Solutions from industry associations can support small and mid-sized businesses in implementing carbon-cutting, cost-saving measures while also projecting sustainability to a growing base of customers with green values. But the real push will come as carbon reduction laws become as pervasive as carbon reduction ideals.

In the extractives sector, a coalition of 10 of the world’s big oil and gas companies called the Oil and Gas Climate Initiative issued a joint statement of agreement with U.N. climate goals. For an industry with a history of resistance, this act demonstrates actual climate leadership — or at least a departure from the reactive, sometimes obstructionist approach of Exxon Mobil.

Ostensibly, governments will recognize that regulations may be necessary in order to balance ecological sustainability and economic sustainability.

Energy, transportation and agribusiness, for example, will need to change fast enough that country emission reductions happen, but not so fast that economies tumble. Local governments will support the process by monitoring local reductions and driving incentives toward those that make it happen, and penalties to those who don’t.

Some companies have been engaging in climate leadership for years, and now have carbon-cutting solutions down to a formula. Exchanging lessons learned at COP21, panelists from a number of multi-nationals shared best practices for climate action.

For example, nine years ago Renault committed to reducing CO2 by 3 percent each year.

“Know what matters,” advised Kellogg’s Chief Sustainability Officer Diane Holdorf. “We’re committed to bringing our suppliers along with us.”

Suppliers do seem to appreciate knowing what matters to their customer; the company surveyed its 113 top volume suppliers and got a favorable response rate over 73 percent.

At L’Oreal, what matters are the 3 issues most material for its environmental footprint: product innovation; waste reduction; and sustainable consumption. To track the emissions from its supply chain, L’Oreal is using the Carbon Disclosure Project (CDP), which uses the clout of more than 800 investors with $95 trillion in assets (more than the GDP of the world) to persuade over 5,000 companies to report annually on key metrics of sustainability.

“It works because it’s fully embedded in the strategy of the company. Performance is built around it,” said L’Oreal Chief Sustainability Officer Alexandra Palt.

At Accenture, what matters is CO2 produced by individual employees. About 85 percent of the firm’s environmental impact happens through business travel and office electricity (see the chart below for a glimpse of how the company is clamping down on those impacts).

“As a professional services company, our impact is a little different than other types of companies,” said Accenture’s Global Environment Director Michael Nicholus during a recent Greenbiz webcast. “We strive to achieve more sustainable business growth by reducing our CO2 per employee. 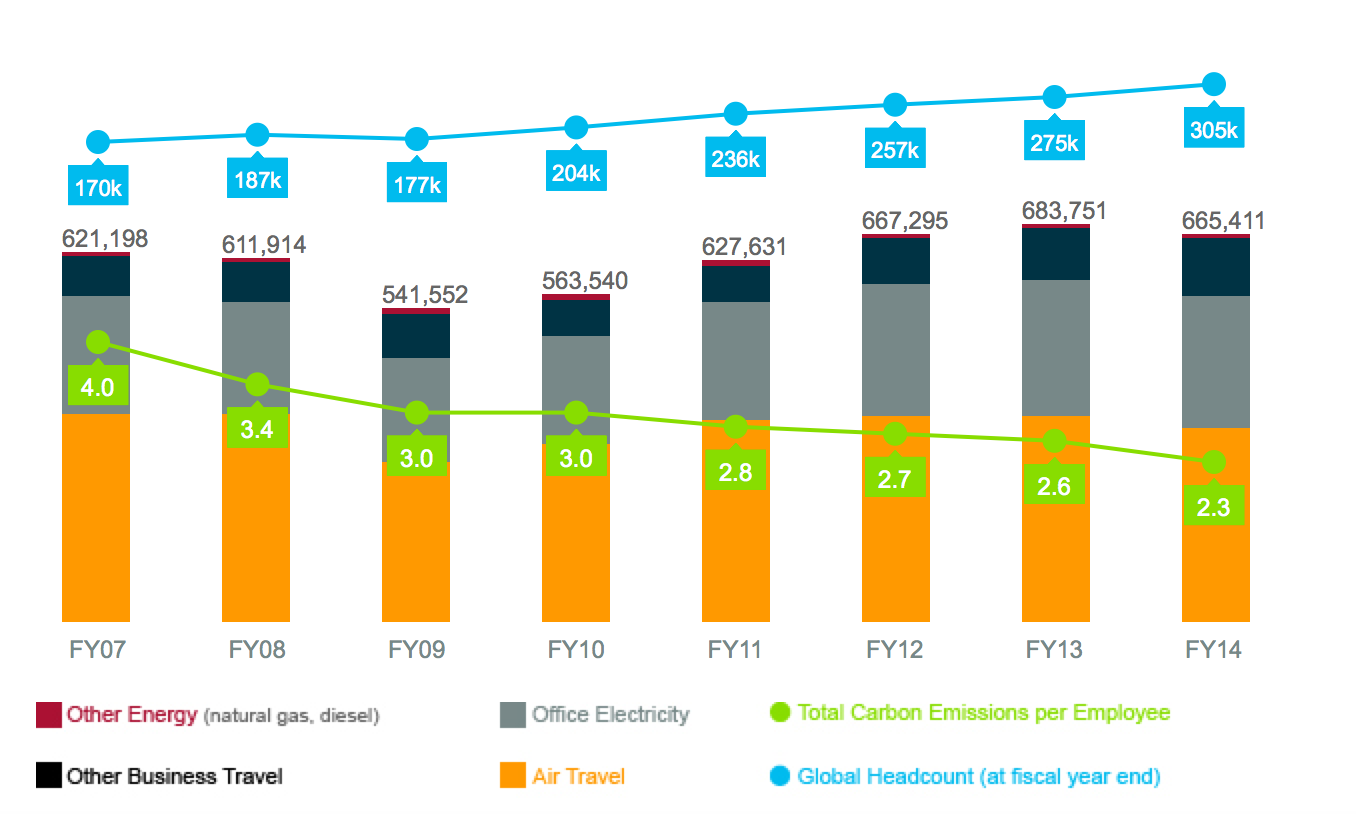 “We’ve been stunned by seeing the amount of energy that can be saved by employee behaviors.”

Good news for other corporates wondering if ecological sustainability is compatible with economic sustainability: While reducing CO2 more than 40 percent per person, Accenture has saved over $65 million in energy spend through energy efficiency, much of it through employee behavioral changes.

For countries, the U.N. is the governing body to hold them accountable to their INDCs.

For companies, accountability will be more dispersed, but no less powerful. Businesses can expect to be held accountable not only to the countries in which they operate, but by NGOs, as well as more discerning customers, employees and investors.

“From what I’ve seen, it looks as if the business sector is suitably ambitious, and everyday stakeholders have a lot to do with this,” said Aron Cramer of BSR. And stakeholders are becoming more ambitious, too.

During a CDP and L’Oreal-sponsored panel, some of those stakeholders foreshadowed the “what’s next” question.

“We heard some bold commitments,” said one observer. “But why not 100 percent?”

Fortunately, climate leadership has cascading benefits: as emissions go down, money is saved, stakeholders are engaged, suppliers are bolstered and reputations are made more resilient. Everybody wins.

Change is indeed afoot, and resources exist to help companies of all sizes adapt.

As Obama said in his national address, “No country, no matter how small, can sit on the sidelines. All of us had to solve it together.”

Companies should take heed, because increasingly they are expected to do the same.